You are here: Home / News

A pruning cut is a wound that is a possible entry point for decay, diseases or insects. Plants “heal” a wound by a process called compartmentalization. This process surrounds the wounded area both internally and externally with tissue that has greater resistance to decay. The wounded area never grows back together and this wound remains a weakened area for the life of the plant. Cutting a small branch and making a small wound is always more wound is always more desirable than cutting a larger branch and making a larger wound making a larger wound. Larger wounds take longer to “heal” (or compartmentalize) and have greater potential for attack by decay organisms, diseases and insects. 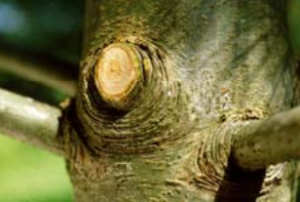 is a radical change from the conventional method use d by arborists since the advent of the chain saw to remove branches from hardwood and coniferous trees.

Good pruning cuts are called natural target cuts by, arborists, who use two targets on the tree to show them where to make the cut. These targets are the branch collar and the branch bark ridge. 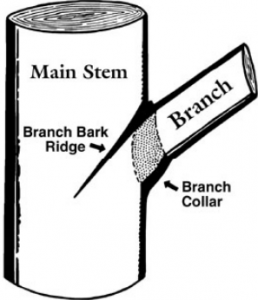 Good pruning involves removing as much of the branch as possible without leaving a stub or flush cutting. 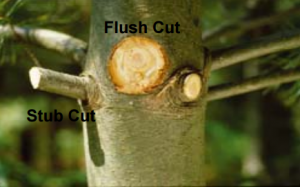 Stub Cuts are pruning cuts that are made too far outside the branch bark ridge or branch collar. These cuts leave branch tissue attached to the stem. Disease organisms “incubate” on the dying stub that remains. Eventually the stub becomes a pathway for decay organisms to enter the tree trunk and cause serious wood decay.

Flush Cuts are pruning cuts that originate inside the branch bark ridge or the branch collar, causing unnecessary injury to stem tissues. Flush cuts can and usually do lead to a myriad of defects including radial cracks, circumferential cracks, discolored wood and wood decay. Flush cuts are improper and may break the protective chemical barrier and allow decay organisms to colonize stem tissue. The spread of this decay will eventually end in the demise of the tree.

one-Undercut one third of the way up through the branch one or two feet out from the trunk to prevent bark stripping.

Cut down and remove limb. A top cut directly into or slightly outside of the undercut will remove most of the branch weight.

Trim branch stub at branch collar. Make a final natural target cut that removes the stub. Final cuts can be made from the bottom up to the crotch if the branch angle is tight and tools won’t fit in the crotch.

Cuts made to remove a portion of a branch, stem or trunk. Cuts are made without regard to the position of the cut or to lateral branch attachment.

Heading cuts usually result in excessive branch development below the cut. These branches are usually poorly attached and frequently break off damaging the branch or trunk they were attached to. 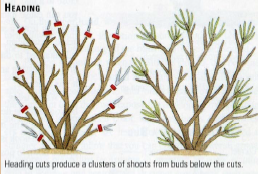 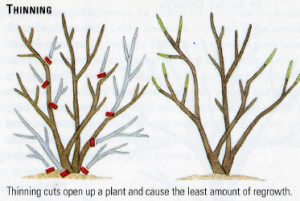 Genetic dwarf trees usually produce very short internodes (the space on a shoot between two leaves). These trees make beautiful landscape shrubs that are easily managed and provide adequate amounts of fruit. Trees grow to 8 to 10 feet tall and wide. Excellent varieties are available in peaches, nectarines, and citrus, and more are being developed for other fruit types. Lower fruiting wood of genetic dwarf trees, especially peaches and nectarines, tends to quickly die due to shading by the dense growth, but trees are small, so production of fruit on the extremities of trees is not a serious problem. Pruning mainly involves thinning branches to open up the canopy and cutting back to maintain tree height and spread. Size controlling pruning cuts can also be made; this should be done by pruning to lateral branches rather than heading.

Full-sized trees on standard rootstocks can grow to 7.6 to 9.1 m tall, while trees on semidwarfing rootstock can reach to 4.6 to 6.1m tall. Both standard and semidwarf trees can be kept relatively small by pruning, but trees of this size may still grow too large for many backyard situations. An excellent selection of truly dwarfing apple rootstocks is usually available, and truly dwarfing rootstocks are being developed for most fruit species. Depending on the type of tree (growth habit and location of fruiting buds), full-sized and semidwarf trees may be trained to an open center, center leader, or fruit bush system.

No matter which training method you choose, use summer pruning to train young trees and shorten the time to full fruit production. On mature trees, summer pruning involves mainly: 1) removing vigorous, upright shoots that are not needed to create permanent branches and 2) heading shoots to control tree height. Summer pruning is done in both spring and summer. When useful, bend and stake any shoots of young trees that you want to grow in a different direction during the spring and summer. Bending branches hastens branch development compared to removing or heading those in undesirable locations and waiting for a new branch to form. If trees received appropriate summer training and pruning, far less dormant pruning is necessary. However, the absence of leaves provides a clear view of the framework of the tree, so thin or head any branches that were not adequately summer pruned. When you dormant prune, it is preferable to prune stone fruits in late February to early March rather than in the fall or early winter. Pruning wounds made late in the dormant season heal faster than those made earlier, allowing less time for disease organisms to infect the wound; also, there is less rain after February. Furthermore, spores of many organisms causing branch diseases are more prevalent with early season rains than later. This is especially true with Eutypa disease, which infects apricots (and grapes) and causes severe gumming and branch dieback, so it is especially important to prune apricots late in the season. Apples and pears can be safely pruned at any time.

The crotch angle should be spread to 30 degrees or larger.

Prune off branches which are attached to the bottom side of attached branches. (Unless this is going to become the new terminal end of the branch). If these branches break, ripping or tearing of the bark of the supporting branch often results.

Open vase or modified open vase for trees in the genus Prunus.

Many fruit trees can also be pruned or shaped for specific function in the landscape such as shade or patio trees, hedges, screens or espaliers.

Manage the growth in the tree so that one branch or side of the tree does not overgrow the other portions of the tree and so that the tree keeps a balanced shape.

Prune to a terminal branch to direct growth in that direction.

As branches bend downward from the weight of fruit, foliage, or wood, they often need to be pruned back into an upright growing position. Use drop-crotching pruning techniques to a side or top branch to redirect growth.

Fruit trees which are pruned to their maximum size will produce the greatest amount of fruit. These trees are pruned into central leader or modified open vase shapes.

To keep fruit tree smaller for ease of picking the fruit, to get more trees into an area, or because of space limitations, prune to modified central leader or open vase shapes. 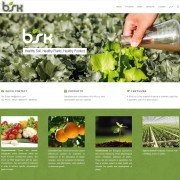